IJCTO does not currently charge any kind of fee to the authors. All accepted articles will be published online in one week's time after the completion of final author proofread.

How to cite item

Purpose: In the treatment planning of uniform scanning proton therapy, an aperture block is designed for each beam with a margin, which typically includes the lateral penumbra measured in water (homogenous) medium. However, during real proton therapy treatment, protons may pass through tissues of different densities within the patient's body before they are stopped. The main aim of this study was to investigate the dependency of lateral penumbra on low- and high-density heterogeneities placed in the plateau and spread-out Bragg peak (SOBP) regions.

Methods: The measurements were performed by placing radiographic films at the isocenter (center of SOBP), and each proton beam was delivered with 150 monitor units using standard beam conditions of the institution.

Results and Conclusion: The preliminary results from this study showed that the lateral penumbra of uniform scanning proton beams was less sensitive to the inhomogeneities introduced in the protons beam path. The low-density heterogeneity in the plateau region had more impact on the lateral penumbra when compared to the low-density in the SOBP region. In contrast, the placement of high-density heterogeneity (whether in the plateau or SOBP region) produced a very minimal difference. The overall difference in lateral penumbra among different phantoms was within ± 1 mm.

In uniform scanning proton therapy planning, an aperture block is designed for each beam with a margin, which typically includes the width of the lateral penumbra. A sharp lateral penumbra is particularly important for the treatment sites that have organs at risk (OARs) abutting the target volume. Several groups 1-5 have performed the measurements and Monte Carlo simulation investigating the dependency of lateral penumbra of proton beams on different beam conditions and geometrical configurations, and it was found that lateral penumbra increases with an increase in range (or energy), depth, and air gap between the aperture/range compensator and phantom.

The commissioning of treatment planning system (TPS) typically includes the measured data that are obtained in a homogenous medium. However, during real proton therapy treatment, protons may pass through tissues of different densities within the patient's body before they are stopped. The presence of heterogeneity along the protons beam path can change the energy spectrum of proton fluence, and this may change the width of lateral penumbra at a given depth as well as cause the degradation of the Bragg peak region. While previous studies have investigated the lateral penumbra of protons in a homogenous medium, the impact of high- and low-density heterogeneities on lateral penumbra for uniform scanning proton beams is yet to be investigated. The principal aim of this study was to perform the experimental measurements to investigate the dependency of lateral penumbra on inhomogeneities placed at different locations upstream from the measurement depth.

The measurements in this study were performed for uniform scanning proton beams on an IBA Cyclotron (IBA, Louvain-la-Neuve, Belgium). A detailed description on the uniform scanning proton therapy system has been provided elsewhere.6, 7 In order to study the impact of heterogeneities on lateral penumbra, we manufactured one homogenous phantom and four inhomogeneous phantoms (Figure 1) utilizing solid-water plates (CIRS, Norfolk, VA), air, and poly-vinyl chloride (PVC) tile. 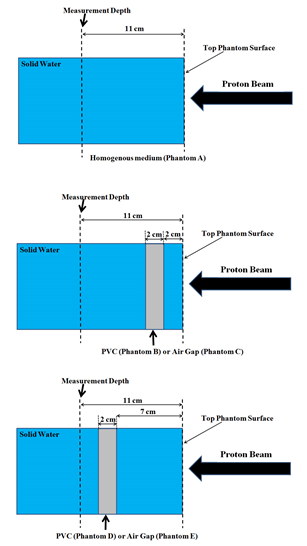 FIG. 1: Schematic diagram of homogenous Phantom A and inhomogeneous Phantoms B, C, D, and E. In each phantom, the measurement was always taken at 11 cm depth from the top surface of the phantom. Each phantom had a rectangular area of 30 x 30 cm2.

Heterogeneities in the plateau region

First, the measurements in each phantom were performed by placing radiographic films (Kodak, Rochester, NY; type EDR-2) at the isocenter, and each proton beam was delivered with 150 monitor units (MU). The measurements were taken for beam conditions listed in Table 1. 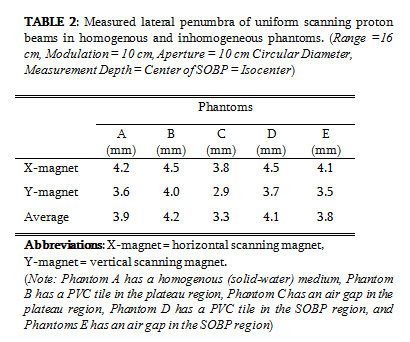 Heterogeneities in the plateau region 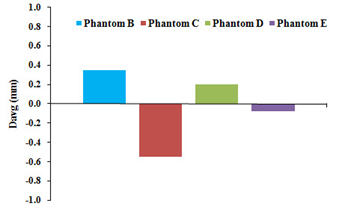 Heterogeneities in the SOBP region

In this study, we investigated the impact of heterogeneities that have rectangular shape, and each inhomogeneous phantom contained either an air gap or a PVC tile. However, in the real clinical situations, proton beams may pass through multiple non-rectangular heterogeneities with various thicknesses before reaching the target. Although the average difference in lateral penumbra due to inhomogeneities is within ± 1 mm, the difference may increase for inhomogeneities with thickness more than 2 cm.

Additionally, if the treatment setup has a proton beam passing through the immobilization devices, one should make an effort in reducing the air gap between such devices and the patient body surface. Since the beam aperture margins are typically selected based on the lateral penumbra of a proton beam for a specific range, it is imperative to investigate the accuracy of treatment planning system in predicting the range of proton beam in the presence of inhomogeneities. An inaccurate prediction of proton range by the treatment planning system will lead to wrong selection of the lateral penumbra, and the aperture margins based on the inaccurate lateral penumbra may lead to over-dose to the normal tissues or under-dose to the target volume during the real clinical treatment.

The authors declare that they have no conflicts of interest. The authors alone are responsible for the content and writing of the paper.

This work is licensed under a Creative Commons Attribution 3.0 License.

To make sure that you can receive messages from us, please add the 'ijcto.org' domain to your e-mail 'safe list'. If you do not receive e-mail in your 'inbox', check your 'bulk mail' or 'junk mail' folders.

Number of visits since October, 2013